A native of Franklin, TN, Chris received his Bachelor of Music degree (Organ Performance) in 2012 from the Peabody Conservatory of Johns Hopkins University in Baltimore, MD. He studied under John Walker, former president of the American Guild of Organists and one-time Music Director & Organist at Shadyside Presbyterian Church in Pittsburgh. Chris then earned a doctorate in Music and Organ Performance in 2016 at the University of Texas. He’s performed recitals throughout America and Europe, including Auferstehungskirche, Leipzig; Freiburg Cathedral; Westminster Cathedral; Bach Church, Arnstadt; Portsmouth Cathedral; Albert Hall, Nottingham; and Princeton University Chapel.

After completing his doctoral studies, Chris became Director of Music & Broadcasting at St. Michael’s Episcopal Church in Charleston, SC. During his time there, an interest in medicine grew from his service as a Firefighter / EMT-B at Pine Ridge Fire Rescue in Summerville, SC. Christopher completed remedial studies in science and gained admission to the University of Pittsburgh Medical School beginning in fall 2022 where he is working toward an M.D. degree. He’ll serve with us during his time in Pittsburgh. 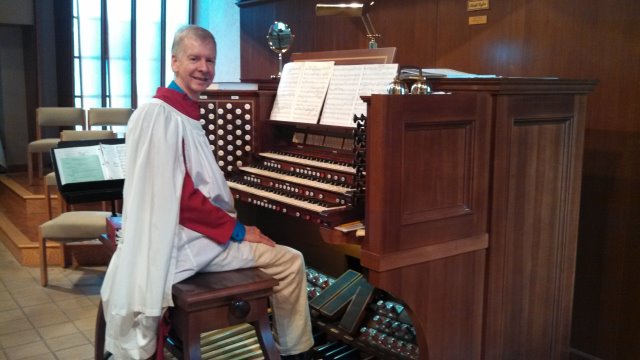 Larry Allen was the Director of Music and Organist of Mt. Lebanon Lutheran Church for 16 years and is now honored with the emeritus title.  He received his Bachelor of Music degree from the University of North Carolina at Greensboro and his Masters in Sacred Music at Union Theological Seminary in New York City where he was a student of Alec Wyton.  He did further study in Paris with Marie-Claire Alain and received the Premier Prix in organ performance from the Conservatoire de Rueil-Malmasion.

Prior to his Pittsburgh move, Larry was for 30 years Director of Music and Organist at Immanuel Congregational Church in Hartford, CT.  He was also head of the organ department at the Hartt School of Music from 1992-2004.  His professional vocal ensemble, The Woodland Scholars, sang for several conventions of the ACDA.

In Pittsburgh, Larry has been Dean of the American Guild of Organists and was the Chairperson of the 2015 Regional Convention which brought over 200 organists and church musician together for a week of concerts and courses for self improvement.  He is the organist for the Pittsburgh Symphony Orchestra with whom he has performed the Saint-Saens “Organ Symphony” and has recorded the Strauss “Alpine Symphony.”

Liturgy of Word and Sacrament

In person: Sundays at 8:30 am and 10:00 am  Please follow social distancing & health and safety guidelines.  Face Coverings are optional and welcomed.
Virtually: Live 8:30 am EST on the congregation's Facebook Page or on-demand throughout the week on our Youtube channel.
" In the celebration of Word and Sacrament, we proclaim faith in the Triune God, confessing Jesus Christ as Lord and Savior. Through Jesus’ life, death, and resurrection, God has redeemed us from sin and fashioned us into a new creation. We invite you to join us and to become a part of our church family!"

How To Use myEoffering to Donate
to Mt. Lebanon Lutheran Church
Click here for Instructions
We look forward to returning to full programming soon.
At this time, in-sanctuary worship and Christian Education are scheduled in the building.  As we return to full programming, organizations requesting to hold activities on Mt. Lebanon United Lutheran Church's campus should confirm schedules with the church office.